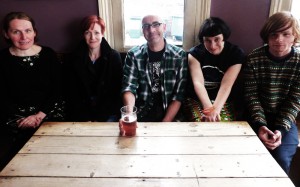 Colin: I know a few of you have been to the festival before.

Tamsin: I’ve been twice as a guest. One of my main aims in life was to play Supernormal and now it’s to be fulfilled.

Colin: Mary’s a veteran Supernormal performer, she goes back even further than I do. She played the first one and the third one and this year you’re playing with Dark Northumbrian too.

Mary: I’m not sure exactly what’s going to take place ‘cos it’s still quite early stages but Dark Northumbrian will be a group of nine people all basically playing folk music. It’s been pulled together by Steven Malley and we’re going to be playing loads of old Northumbrian music. It’ll be a nice mix of stuff and hopefully we’ll get some people from Lutine singing as well.

Owen: I’ve never been to Supernormal but I had heard about it. I read about it in The Wire and I was gutted I couldn’t play last year. Sometimes we play as a two-piece but I think all three of us are coming along and hopefully we’ll be there for the whole weekend.

Sarah: Last year I really, really wanted to go but I was working at the worst festival ever, the complete antithesis to Supernormal. I didn’t want to be there and I found a dead woodpigeon under my bed. For Supernormal I’m going to be doing my theremin and robot set. It’s electronics but there’s bits of English folk in there, the parts that get under my skin. And Hugo, who’s a ventriloquist’s dummy, is going to speak the samples. I don’t know what people will make of it but it’s more than just a music act, it’s trying to create a bit of total theatre really. I hope to do a bit of theremin with Slum Of Legs again too.

Tamsin: Really we can just do what the fuck we want in our set. The main problem is we’ve got shitloads of songs and I hate dropping any of them.

Sarah: I’ve done many, many festivals but I tend to base my festival decisions on: Have they got a roof? And do they serve toasted teacakes in the cafeteria?

Tamsin: Well in the manor house they do cream teas and you can use the toilets. I’m looking forward to it, it’s the best festival in the world. No one wears fairy wings and even the children there are pretty rad.

Mary: It’s something to do with the atmosphere that’s created. The worst thing I find at festivals – and at trendy gigs in London as well – is when someone’s playing music and everyone’s unsure about whether they’re supposed to like it. They’re looking at each other and wondering “Is it alright if I like this?” and Supernormal is the opposite.

Tamsin: I really don’t like most other festivals ‘cos of the people. Once I went to one and I got so bored and depressed that I drank a whole bottle of Jack Daniels and had a massive meltdown, going “It’s all so shallow and pointless!” That doesn’t happen at Supernormal though. I think it’s like how festivals would have been 15 years ago before posh people started going and ruined them for everybody. The thing is, most mainstream festivals are full of these people with no spatial awareness who you’re kind of hating, and you know in 15 years’ time they’ll be dismantling the welfare state so it just makes it even worse.

Sarah: The worst place we’ve played was a children’s party.

Mary: You were booked for a children’s party?

Sarah: Yes, because they saw the robots and thought they were puppets. They made us stop playing and all the children cried and they paid us to go away. It was good actually.

Mary: Oh, what a great gig!

Tamsin: Last year on the dancefloor at Supernormal there was this thing, an entity, that was really tall. It had a balloon for a head and it had a scarf around it so you couldn’t see anything else, and it was just walking around the dancefloor. Eventually I went up and asked it, “Who are you..?” and it took off its head and it was a ten-year-old child. It was amazing. So even the children are cool.

Colin: One of the things that’s cropped up with Supernormal in the last couple of years is there’s been a bit of a thread about there not being enough ladies involved. Would you concur with that as a punter?

Tamsin: Yeah, it’s the same with all festivals. I mean, I don’t know how many women performers there are this year but if you’ve not got 50% then you’ve still not got the right amount have you?

Sarah: We were talking about this only the other day and I think it’s about amplifying the signal. Because when women do really good stuff their male peers do not amplify the signal in the same way that they do when men do really good stuff. And so the festivals don’t pick up on it. It’s really hard to explain but I know it and I feel it and I’ve lived it for years. Many of my female companions say the same thing, and I don’t know how you get round it, but what we do is we just all big each other up. I sometimes feel if I was male I could fart into a crisp packet and get boosted but as a female I have to work a hundred times harder. I don’t think that’s just festivals, I think that’s the culture generally.

Mary: There’s just something that’s automatically seen as more valid about male creative endeavours. I was really idealistic and against that idea for a long time when I was younger but eventually, after banging my head against the wall so many times, that’s the harsh reality. Like you said, it’s hard to describe but there’s just something about that in the air.

Sarah: If you live it every day, you know it. You feel almost like you’re an interloper.

Owen: I feel out of place every time I play though. I never feel like I’m part of a boys’ club. But that point of view may be part of it, I’m not sure.

Mary: I think everyone feels equally insecure about going on stage.

Sarah: I feel damned if I talk about it and damned if I don’t. On the whole it’s so embedded and so problematic that I’d almost rather not talk about it. I’d rather just do a fuck-off good set and go, “Right!”

Mary: The key thing is I don’t feel like that at all at Supernormal.

Tamsin: I mean, Supernormal does its best to try and reduce that imbalance but you can’t rest on your laurels. You’ve got to keep on working at it, really proactively go out there and make it a safe space. It takes work.

Sarah: I think women, as well, need a space to be ugly and a space to be fierce. Well, I’m very into being ugly and fierce and not necessarily likeable on stage. Being a bit different, like “What the hell is this?”

Sarah: The other thing that I find interesting is that sometimes when I get feedback – I’ve seen it written down – people say, “It’s like a strange aunt walking onstage.” I find that so interesting that that’s the only reading they’ve got. I mean, I don’t mind people thinking I’m strange because I am…

Colin: No, you’re right, I totally agree with that. Strange looking blokes in bands are not treated that way.

Sarah: Anyway, I do stuff with strange looking robots.

Colin: One of the really positive things that’s come out of this sort of discussion is that there’s some girls have actually formed a band from talking about it at Supernormal. They’re playing this year, Charismatic Megafauna.

Tamsin: Brilliant. Funnily enough Slum Of Legs formed at ATP, which is the don of all bearded middle aged men, and that was maybe a reaction to that. Actually thinking about it, the thing about Supernormal is it’s a home for all the freaks and the oddities and the geniuses.

Mary: It’s a really lovely, convivial atmosphere. I’ve found it’s the sort of festival where you make loads of great new friends, it’s really relaxed and friendly. It’s quite like having a conceptual adventure.

Sarah: I’m really looking forward to it. The thing I love is putting my set in front of people that have never seen me before. I like the challenge of that and it’s quite humbling because you learn things that are rubbish and things that are good. It’s a healthy thing to do.

Tamsin: You know when you go on holiday sometimes and the air is golden, like in the Mediterranean? It always feels like that at Supernormal, even though England isn’t always warm, but there’s a slightly golden feeling when the sun’s going down. You don’t feel like there’s going to be anything horrible happening, you just feel like you can coexist with people. You’re going to see things and hear things you haven’t heard before and have a really good experience. It seems genuinely like an alternative.